CHALMERS AND WILSON AMONG FAVOURITES TO WIN THE MEN’S TITLE 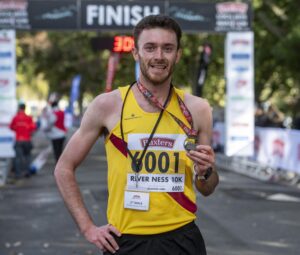 Sean Chalmers attempts to create out a little bit of local athletics history when he competes against a record field of 3,400 runners in the Inverness half marathon on Sunday (March 13).

The men’s title has never been won by a member of Inverness Harriers in the 37 year history of the race, but the Scotland international looks more than capable of putting that to right this weekend.

He is the fastest man in the field, having set a personal best time of 1:04:22 at Farnborough in January – that’s five secs quicker than the Inverness race record set by Deeside’s Robbie Simpson in 2018.
And despite a disappointing marathon debut in Seville three weeks ago, when he recorded 2:25:05 after suffering from a stitch and stomach cramps, Chalmers still looks to be the man to beat.

He said: “I feel I’ve got over the problems I had in Seville so I should be fine on Sunday. I’m looking forward to getting a good solid race, but I don’t think I’ll be going for a really fast time. I’ve been selected to compete for Scotland in the Cardiff half marathon at the end of the month, so ideally I’d like to be able to save something back for that one.” 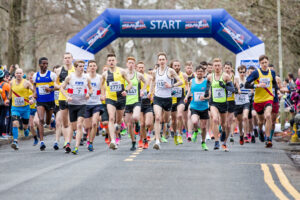 Under starters orders at the 2020 Inverness Half Marathon

That doesn’t mean to say Chalmers won’t be anything other than competitive and there’s little doubt he’ll be difficult to beat. He also has winning form in Inverness, having won last year’s River Ness 10k.
One of his main rivals is fellow Scotland international Kenny Wilson who hopes it might be a case of third time lucky this weekend. When the Moray athlete made his first Inverness appearance, in 2017, he finished third in 1:08:37 and followed that up in 2020 by taking second position in 1 :06:35. So could he be ready to step up another level?

“I’m not sure,” he said, “I feel I’m in decent shape and would be happy if I could run a similar time to what I did two years ago. I’m doing the Manchester marathon three weeks later so it would be good to sign off my preparations with a good performance to give my confidence a boost.”

Wilson has shown good cross country form since the turn of the year and he recently clinched the North league title.

He said: “I certainly feel as though my preparations for the marathon have gone well and hopefully everything will fall into place. This weekend will give me a good indicator of what stage I’m at.”

James Donald should also be in the reckoning for the top prizes. The Dundee Hawkhill Harriers club member has a best time of 1:05:27 from the 2020 Antrim Coast half marathon and he also has pace over shorter distances having won the Scottish indoor 1500m title two years ago. Like Chalmers, he is also to represent Scotland in Cardiff.

Dougie Selman (Corstorphine AAC), who was fourth in the 2020 Inverness race with a time of 1:06:58, should also feature amongst the lead runners.

Great Britain ultra distance trail running international Tom Owens (Shettleston Harriers) offers a touch of an unknown threat. Although he has no real half marathon form, his fine record in much longer races shows he has the strength to do well.

Fife AC’s Annabel Simpson is the fastest entrant for the women’s race having set her best time of 1:16:28 at the 2018 Edinburgh marathon.

But the University of West Scotland PhD student hasn’t taken part in any serious races since finishing fifth in the Scottish 4k cross country championships at the beginning of November.

She said: “I’d like to improve my personal best time but I don’t know how realistic that is considering how little I’ve been racing. I’d like to think I’m in better shape than in 2018, but it’s difficult to know.
“Ideally, I’d like to have done a 10k or 10 mile race at some point over the past couple of weeks, but there hasn’t been anything available. So, I’m going in a bit blind.

This will be Simpson’s first appearance in the Inverness race and she’s looking forward to the occasion. She said: “I’ve heard a lot of good things about it and I believe it’s a fast course and a well organised event. There’s a few of us from Fife AC going up for it so it should be good.”

Simpson revealed that she doesn’t look at the entry list to see who else is running, but when she stands on the starting line she’ll find a few other athletes capable of challenging for the top prizes.
One of these is Metro Aberdeen’s Claire Bruce who is confident of improving on her first attempt at the Inverness half marathon seven years ago.

She said:” Actually, it was the first proper race I did and it took me 1:37:51 for 38th position in the women’s division. Hopefully I’ll do better than that. I also ran there in 2019 when I was fifth in 1:22:35.”
Indeed, Bruce is showing the sort of form which suggests she is more than capable of improving on her best time of 1:18:27 set when picking up a Scottish championship bronze medal at Glasgow in 2018.
Last month she set a personal best 10k time of 35:28 in Edinburgh, but despite that she is playing down her chances of winning this weekend.

She said: “I’m feeling good but my main focus is the Manchester marathon at the beginning of April so I probably won’t be going flat out at Inverness. The marathon is just three weeks away so it’s probably too close for me to give it a full effort.

“But, I think I’ll go with how I feel. If I’m feeling good and there’s good competition I might try to stay with it. The course is really good if the weather is fine so we’ll see what happens.”

Jen Wetton, Central AC (right) was third at the 2020 Inverness Half Marathon

The big question is whether Central AC’s experienced campaigner Jen Wetton can pull off what has so far proven to be an elusive first victory in the race. The Stirling athlete is making her seventh appearance over the past eight years and during that period she has never finished lower than fourth. She has taken second top spot on the podium three times and in her last outing, in 2020, she was third.

It’s a remarkable record of consistency and there’s little doubt she will be determined to strike gold for the first time. Her best half marathon time of 1:16:51, was set when winning at Alloa in 2015, and it remains to be seen whether she can get close to that again this weekend. There’s no doubt,however, that she is in decent shape as shown when she finished a very creditable ninth in the national cross country championships at Falkirk at the end of February.

Others hoping to feature towards the head of the women’s field include Lauren Wilson (Edinburgh AC) and Avril Mason (Shettleston Harriers).

ELITES CHASE CASH PRIZES BUT ALL RUNNERS TREATED LIKE CHAMPIONS

The elite runners will be chasing cash prizes with the men’s and women’s champions each pocketing £300. But while the event has attracted a number of top calibre athletes at the sharp end, Race Director Malcolm Sutherland emphasises Inverness has a superb reputation for welcoming runners of all levels.
He said: “We are delighted to see a record number of runners choosing Inverness and we can assure everyone that they’ll receive a warm and enthusiastic welcome. There’s a fantastic level of support along the route and the atmosphere in the stadium at the finish is always enthusiastic and heart-warming. Every finisher is treated like a champion.

“It’s a great day out. In addition the half marathon, we have a 5km fun run which has attracted almost 1,000 entrants. A limited number of places will be available on race day but anyone planning to take part should arrive early to avoid disappointment. Children aged 8 and under must be accompanied by an adult who should also enter.”