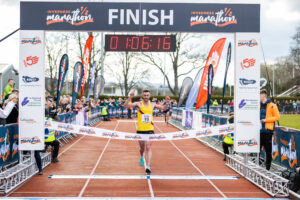 First male Sean Chalmers crosses the line in a time of 1:06:16

Scotland international Sean Chalmers took top spot in the Inverness half marathon after a pulsating battle over the closing stages with Shettleston’s Peter Avent.

And the Aberdeen-based P.E. teacher had the home athletics fans cheering to the rafters as he became the first member of Inverness Harriers to lift the men’s title since the race was first held in 1985.

But he was made to battle every inch of the way for his success ahead of a record field 3,400 entrants. It was only as they approached the final 300m on the track at Queen’s Park stadium that Chalmers was finally able to break clear to win in 1hr 6min 16secs with Avent setting a personal best time when finishing just three secs behind.

Cambuslang’s Fraser Stewart took third position in 1:06:40 while Moray’s Kenny Wilson finished fourth in 1:06:48 on a day when fourteen men completed the course in under 1:10 making this one of the strongest in-depth turnouts in the 37 year history of the event. 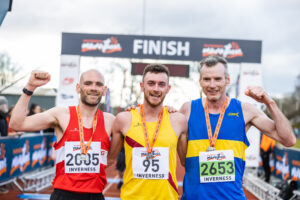 Top 3 men in 2022 Inverness Half Marathon

Chalmers said: “It was certainly very competitive, there was a different leader on so many occasions. There was a group of about six of us for a while with Kenny Wilson taking on the pace. But at six miles I began to get the same tightness in my stomach that affected me at the Seville marathon three weeks ago and I thought I might have to call it a day. But I so much wanted to be the first Inverness Harriers member to win the title and that kept me going.”

“It was tough and I had to run harder than I had hoped as I have the Cardiff half marathon later in the month. The course was hillier than I expected and the wind was brutal at times, but on a calmer day this is without doubt a fast course.”

Simpson so close to record in women’s race 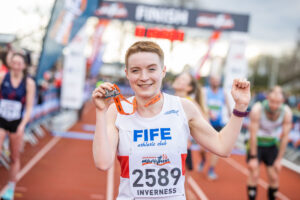 Fife AC’s Annabel Simpson showed exceptional form when winning the women’s race in 1:13:40 – which is just 19secs outside the course record set by Kenyan athlete Cathy Mutwa in 2007.

It was a remarkable performance from the University of West Scotland PhD student who scythed close to three mins off her previous best time when finishing almost five mins ahead of her closest challenger.

Simpson came into the race in a confident mood after setting a women’s 5k course record in the Allan Scally road relay the previous weekend and admits to being delighted with the outcome.

She said: “It’s nice to improve my personal best by so much. It has been difficult over the past couple of years with covid, so it’s good to be back competing. After my run last week, I knew something decent was possible today, but you never know.

“I started on my own, but for most of the way I had guys to run with until the later stages when it began to break up again The wind was in your face going up the hills so it was tough at times. But the crowd support out on the course was brilliant.

“I’m not sure what will be next for me as my university work will take priority for a while. Later in the year I’m going to the Valencia half marathon where I’ll be looking to improve my time again.”

Lauren Wilson (Edinburgh AC) was runner-up in 1:18:27 while Jen Wetton (Central AC) maintained her fine record of consistency at Inverness by finishing third in 1:18:38. The Stirling athlete was making her seventh appearance in the race over the past eight years and during that period she has never finished lower than fourth. She has taken second position on the podium three times and has now been third on two occasions.

Fourth placed Avril Masson (Shettleston Harriers) was first in the over-40 age group in 1:21:20 while fifth-placed Catriona Fraser-Lennox was the leading Inverness Harriers member when placing fifth in a personal best 1:21:27.

Nelson and Heggie lead the way in 5K 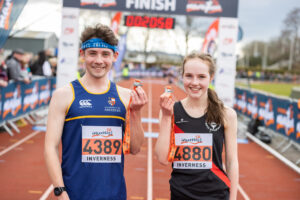 Luke Nelson, a second year medical student at Aberdeen University, led home a field of 1,000 runners in the accompanying 5k. The 19 year-old Glaswegian, who recorded 17min 15secs, was delighted with the outcome, saying: “I’m happy with that as it’s just 20secs outside my best. It’s the first time I’ve run here and I really enjoyed it. The course was very flat which is always good.”

Caitlin Heggie (Ross County AC) tuned up for an appearance for Scotland in the schools cross country international later this month by taking first spot in the women’s division of the run.

She said: “I’m very pleased as my time is about one minute quicker than I ran in the River Ness 5k. Now I’m looking forward to representing Scotland for the first time in the schools international in Wales.”