Weynay Ghebresilasie of Shettleston Harriers and Liz Abbott of Lytham St Annes Road Runners have won the 2020 Inverness Half Marathon, in times of 01:05:06 and 01:17:53 respectively. 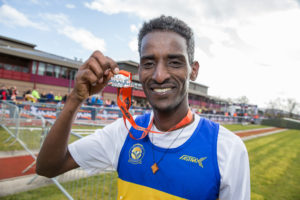 Winner of the Inverness Half Marathon, Weynay Ghebresilasie in a time of 01:05:06

The win sees both Weynay Ghebresilasie and Liz Abbott take their second Inverness Half Marathon gold. 2,940 runners signed up for this year’s Half Marathon; the biggest in the event’s history.

The 5K, which took place alongside the Half Marathon, was won by Lucas Cairns and Emily Andrews, both from Inverness Harriers in times of 15:58 and 18:56 respectively. A total of 1,068 runners signed up for the 5K.

The Graeme Moffat Memorial trophy for the fastest Inverness Harrier in the Half Marathon was awarded to Graham Bee with a time of 1:13:43. 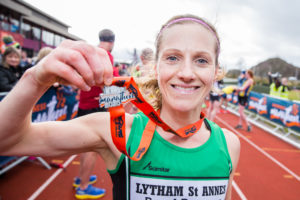 Female winner of the Inverness Half Marathon, Liz Abbot in a time of 01:17:53

“There was a great buzz throughout the day, with runners from around the world ascending on the Highland capital to take part. All ages and abilities were represented, and it was great to see everyone enjoying themselves, whether they were running for fun, to set a new PB or to raise funds for charity.

“Thank you to our sponsors and partners and all those involved in the organisation of this year’s event. But the biggest thank you goes to all those who took part and the supporters and volunteers who gave our runners a warm Highland welcome. We hope to see you all again next year!”

Paul Bush OBE, VisitScotland’s Director of Events, added: “A huge congratulations to all the runners who have taken part in today’s Half Marathon and 5K. Scotland is the perfect stage for running events, and with a large number of participants and spectators travelling to stunning Inverness and the Highlands, we can expect to see strong benefits for the area, paired with wonderful efforts for charity.”

The official charities for the 2020 event were SAMH (Scottish Association for Mental Health), Alzheimer Scotland, The Archie Foundation, Highland Hospice and Marie Curie, with a number of runners raising funds for these and other good causes.