After an on-off relationship with running, Edinburgh-based secondary school teacher Caitlin Garrett discovered an enjoyment of the sport while on a gym treadmill.

Having reached her weight loss goal in January 2019, shedding an impressive seven and a half stone, Caitlin used the treadmill as a way of maintaining her weight loss and was soon hit with the running bug! 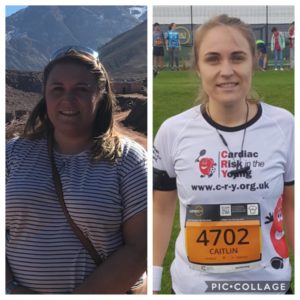 Caitlin Garrett will be running the Inverness Half Marathon in March

Caitlin’s newly found passion soon led her to set a goal of running a 10K and she was given the opportunity to run the ‘Red Wave’ of the Great Aberdeen Run. There, she proudly wore the Aberdeen Football Club logo on her run number and was cheered on at the start line by some of the club’s famous faces.

Caitlin’s running career soon escalated when she was recruited by a colleague to run a leg of the Edinburgh Marathon relay. In May 2019, she ran an 8.4 mile section of the marathon and realised that her goal of running a 10K now wouldn’t be as big an achievement as she had hoped. It was then that she signed up for the Scottish Half Marathon in September, which she completed in 1:56.

The next step of her running journey is to complete a full marathon. A goal she is set complete in April 2020 at the Manchester Marathon. And the 2020 Inverness Half Marathon will be well-timed for Caitlin’s marathon training.

Caitlin said: “As soon as I signed up for the Manchester Marathon, I knew Inverness Half Marathon was a must-do! I have heard such good things about the race and that the course is beautiful.

“Throughout my training, I’ve had great support from my running group, Edinburgh All Runners. I also have a friend running the Half Marathon with me and a running coach, Lloyd Kempson from Team Project Run, creating my weekly training plan. I love the training, despite the six mile runs on cold winter mornings before work!”

In addition to the incredible improvements to Caitlin’s physical wellbeing, she credits running for improving her mental wellbeing.

Caitlin continues: “Running has been the single most important factor in improving my mental health. Despite losing the weight before starting my running journey, I was still in a very negative mindset about what I looked like and my own mental strength. Beginning running showed me that I am much more capable than I ever believed I could be. Reminding myself of my achievements after a difficult run turns my mindset around, and my mantra – which I’ve since got tattooed – sums up my attitude; She believed she could, so she did!”

And you can too!

If you are interested in taking part in Inverness Half Marathon, you can sign up here until 18th February 2020, subject to race capacity.