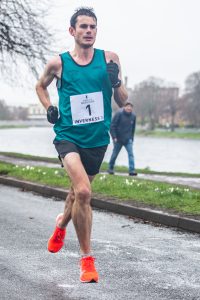 Robbie Simpson of Deeside Runners on his way to winning the 2019 Inverness 1/2 Marathon.

Robbie Simpson realised just how tough the conditions were towards the end of today’s Inverness half marathon when he looked up and saw a seagull which was struggling to make any headway into the ferocious wind and driving rain.

The 2018 Commonwealth Games marathon bronze medallist couldn’t recall when he last faced such adverse  weather in a race, but despite that he still posted a highly respectable winning time of 1hr 6min 15sec to finish well clear of a record field of close to 3,000 competitors.

The time was well adrift of the course record 1:04:27 he set under more favourable circumstances last year, but Simpson was more than satisfied with the outcome.

He said: “It was so bad towards the end that I’m convinced the seagull had come to a complete halt in mid-flight. I don’t normally mind the wind and rain too much but it was bitterly cold as well. I was running low on energy over the final 20mins and wanted to take a gel with some water but my hands were so numb I couldn’t do it.”

Despite his discomfort Simpson had the race sewn up early on, opening a 50 metres lead over his pursuers inside the opening two miles and the gap continued to grow from that point on and by the finish he was close to half a mile ahead of the best of the rest.

Simpson said: “It was great to begin with because there was a tailwind and all the way through to the halfway point I was feeling good. I thought I could make up some time over the second half but when we turned into the wind it was really hard to keep the momentum going and it became a bit of a battle.

“I didn’t know what was happening behind me but I didn’t ever feel I was pushed to my limit. The conditions slowed me a little but from a running point of view I felt fine. I’m a little disappointed with my time but that’s down to the weather conditions and not being pressed by anyone being quite close behind like last year.”

Simpson is now looking forward to next month’s London marathon where he hopes to improve his best time of 2:15:04 set in the capital two years ago.

He said: “I’ll probably do the Garioch half marathon as a training run later this month. Then there’s the Scottish 10 mile championships in early April, but I might give that a miss and just concentrate on training for London.”

There was more success for Simpson when he led his club, Deeside Runners, to the team title with backing from Scotland hill running international James Espie who was sixth in 1:11:17 and Jamie Ross, 51st in 1:20:45.

Donnie Macdonald, who was fourth in a personal best 1:10:35, received the Graeme Moffat Memorial Quaich as the first Inverness Harriers club member to finish.

He said: “I am really happy to win the trophy and I’m delighted to run my fastest time in these conditions. I always seem to run well in really bad weather.I just decided to commit myself from the start and I went with some guys who are quicker than me and it worked out well. It’s an important step in my preparations for the Stirling marathon at the end of April.” 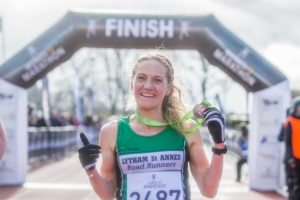 Liz Abbot of Lytham St Anne’s Road Runners crosses the line at the Inverness 1/2 Marathon in a time of 1:16:52 to win the female race.

Lancashire athlete Liz Abbott produced an outstanding performance to win the women’s title by completing the course in 1:16:52, a time bettered by only 19 men.

The Lytham St Anne’s Road Runners club member was competing in her first half marathon for almost a decade and she took close to 10mins off her previous best time.

She said:”I have been away from running for a long time as I took a break after starting a family. The last half marathon I did was at Wilmslow in 2009 and I only decided to lace up my running shoes again about 11 months ago.

“My brother Nick lives in Inverness so we decided to come up to visit him and take part in the race. He was competing and so was my my mum, Jan, so it has been a real family day out.

“I was hoping to run around 1:19 but when I saw the weather forecast I wasn’t sure about that. So I’m really pleased with the time I got. I was leading from just after two miles and I never saw any other women after that. It was hard work under the conditions but I enjoyed the course. It’s undulating, which seems to suit me. And I hope this performance will get me a place on the start line for next month’s Manchester marathon.” 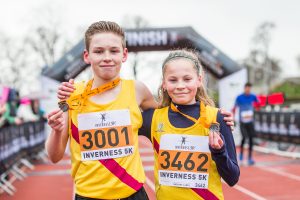 There was family double joy in the accompanying 5km fun  run in which Lucas Cairns (Inverness Harriers) took top spot ahead of a field of 1,200 runners in 16min 33sec while his younger sister Anna,winner of the under-13 title at last month’s Scottish cross country championships, was first girl  in 19:09. It’s the second year in a row that Lucas has taken top spot in this event. He was followed home his clubmate Euan Roll in 17:11 while another Inverness runner, Lois Macrae, was second girl in 21:16.