Last year’s winner Robbie Simpson of Deeside Runners who set a new course record in a time of 1:04:27 beating the old record by 5 seconds.

Robbie Simpson hopes a recent foot injury won’t prevent him from putting in another top class performance in Sunday’s Inverness half marathon which has attracted a record entry of 2932 runners for the 35th edition of the race through the Highland capital.

The 27 year-old Deeside athlete set a course record and personal best time of 1hr 4min 27secs when winning last year, just six weeks before going on to pick up a bronze medal for Scotland in the marathon at the Gold Coast Commonwealth Games in Australia.

Simpson is looking for a confidence-boosting performance as he begins to step-up his preparations for April’s London marathon in which he’ll go in search of the 2hr 13min qualifying standards required to be considered for a place on the Great Britain team for the world championships in Doha later in the year.

His preparations over the winter haven’t gone too smoothly, however, as he has been hampered by a back problem, illness, and most recently a painful foot, but despite all of that he remains quietly optimistic.

He said: “I developed the sore foot after trying out a new pair of trainers. It never felt too bad when I was running, but afterwards it was very painful. If I took a day off it would be fine, but the next time ran it would flare up again. I certainly couldn’t run twice a day.

“Last week I didn’t think I’d be able to run at all, but, my physio, James Cruickshank, worked some magic and seems to have sorted it out so hopefully it will be fine now.

If it does flare up again I know I can get it under control by taking a day off. So I certainly hope to be on top of it and that I’ll be able to race.

“Despite this and the other problems I’ve had, I feel I’m in fairly decent shape. If I don’t get a personal best time I won’t be too disappointed as it’s not the end of the world. I still have plenty of time before London. I just want to run well on Sunday to see how things are. If I can do around 1hr 5min I’ll be happy. Obviously I’d like to run faster, but we’ll just have to see.

“I like the Inverness course and I think it’s a fast one but it depends on the weather and how competitive the race is. Last year I was given a strong challenge by Dundee Hawkhill’s Kris Jones and that helped push me on. It’s a pity Kris isn’t running this year because of injury. I’m sure some of the other guys will be keen to push that pace though.”

Donnie Macdonald, Graham Bee and  Michael O’Donnell head a strong Inverness Harriers squad aiming to retain the team title but they face a challenge from Metro Aberdeen’s Ben Ward, Tom Doney and Sam Milton. Macdonald is also chasing the over-40 age group title but faces a tough opponent in the shape of Kinloss to Lossiemouth half marathon winner Tom Roche (JS Kintore).

As usual, the first member of Inverness Harriers to complete the course will receive the Graeme Moffat Memorial Quaich 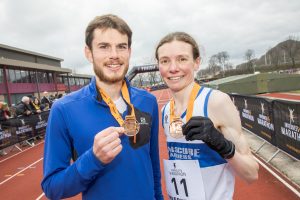 Glasgow athlete Katie White produced the fifth quickest women’s winning time in the history of the Inverness half marathon when taking top spot last year in a personal best time of 1hr 15min 58secs and she’s seeking a repeat performance on Sunday.

She said: “I’m not sure if I’m in better shape than last year so I’ll be looking for a similar time, although it would be good to get a personal best. The course always seems to produce some fast times because there’s usually a very competitive field, and hopefully it will be the same this year. It’s not the flattest course, but it seems to suit me.”

White, who was silver medallist in the world masters age 35-39 half marathon championships in Malaga last September, goes into the race as clear favourite but there’s a large number of good athletes who will be keen to give her a run for her money.

Claire Bruce, the Scottish half marathon championship bronze medallist, has a best time of 1:18:27 but will be aiming to go faster this weekend. She heads a large Metro Aberdeen squad which also includes Great Aberdeen 10km champion Ginie Barrand who has a best time of 1:20:05 set when finishing third at Inverness two years ago.

Fife AC’s Sheena Logan who set a personal best half marathon time of 1hr 21min 56secs when winning the Great Aberdeen half marathon last August, will lead a strong Fife AC side which includes Halina Rees and Morgan Windram-Geddes.

The 2017 Inverness champion,Dunblane-based Hungarian runner Fanni Gyurko (Central AC), is also in the field but this will be her first race since December. Gyurko’s clubmate Jenn Wetton, who finished runner-up three years in a row between 2015 and 2017, returns for another crack at a podium position.

Metro Aberdeen and Fife AC are expected to be among the main contenders for the team title held by Edinburgh AC.

Race Director Malcolm Sutherland is anticipating another great day of action to celebrate the 35th running of the Highland event.

He said: “It’s fantastic to have a record number of close to 3,000 runners taking part in the half marathon and it’s amazing to have sold out our places ahead of the planned closing date. Some clubs will be represented in a big way, with Perth Road Runners bringing 82 competitors, Metro Aberdeen 60 and North Highland Harriers 47.

“There should be some fantastic performances from the top Scottish athletes at the front of the field but it’s always great to see people doing so well all the way through the field. Our oldest runner is 75 while, at the other end of the age spectrum, we have six 17 year-olds taking part.

“In addition we have a capacity field of 1200 taking part in the 5km fun run in which there’s a  couple from Bedford, aged 90 and 86, taking part. They are visiting family in the local area and decided to sign up.”